hammock-swaying
i turn the pages reading the tales
of an emotional day laborer
who, when she deconstructs the rolly table, is really deconstructing
all the ache

the great green swirl
of parsley and oregano and thyme and garlic and olive/veggie oil and salt and vinegar and the tiniest dash of chipotle
while it whooshes in the cuisanart
under the mood night lighting
in karma kitchen
_______
mama cat curled and splayed
in my blanket-wrapped lap
(the blanket – fleecey and made of blue and stars)
on my porch under the past-half-not-yet-full moon
swelling sky
_______
a pair of chopsticks at angles to each other
on the sandy/dusty porch floorboards
must have been here a while
but no longer than a day,
how we all eat lunch around them
and these chopsticks, in the book of codes, are code for what might feel like
the unsayable

fox tail seedheads brush/scratching my face, arms, thighs as i lean in
to tug and yank
from the headers and beds
of south garden
my feet gathering dirt
from all the shaken-out-from-the-roots soil
being tossed about

_______
the cicada in the peach tree i disturb
just by walking past
how it buzz-buzz-flaps
(like something that needs to take a running start)
and swirls in a few little circles – bumping up against branches
before it is airborn away from me
_______
how we joke about the rooster always piping up which means
we never get to hear what the orange hen has to say
_______
i like the precision, it’s satisfying i say of using the 1/4 teaspoon to measure salt for each quart of tomato juice
and the teaspoon to measure salt
for each quart of pulp
and eric says he finds satisfaction in guessing
we should start a business together i joke
and we laugh for what feels like the first time all day
_______
the white bowl that i pour a pyrex full of fresh cooked tomato juice into
that eric and i take turns sipping out of in karma kitchen
(he’s a good slurper)
where the two ginormo pots of tomatoes cook down
and the one hot water bath heats up
_______
sunset walk report:
at first, the cloud is a band pulled across that molten orb – and the band has squares punched out of it
and the orange blocks of light coming out of the punched out squares make me think of windows in a row like on an airplane
then the band is a teenage mutant ninja turtle’s mask
the sun’s eyes glowing out
and then, as it the sun sinks and the cloud goes from a holed thing to a solid thing
there are just two shreds of light hot pink and then,
as one might suspect with a sunset,
they are gone
_______
mica and i laughing to tears about selling off things like
the duct-taped handle karma kitchen whisk
as one way of making a living when it comes down to
being just me and the five cats
real hippies used this is how mica suggests i market it
as well as highlighting the added nutritional value (enzymes?) of the food bits that are surely to be caked on during the time of sale
_______
it is tonight that i notice
(even though it surely has been going on for at least four or so days)
that it seems to be the official end
of firefly season
_______
one wish i bestow
for a particular forty-thirteenth-eighth birthday:
many meteor-like glimmers
flashing across your sky
for the rest of the year
_______
from the water world: 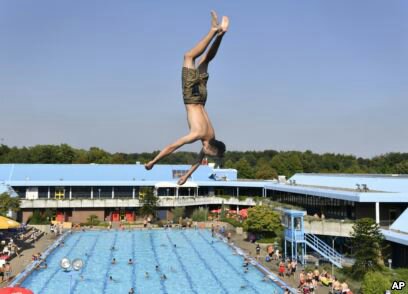 A boy jumps into a public pool on a hot day in Gelsenkirchen, Germany. – voice of america, day in photos

a small wing
on the south-facing window’s sill
transluscent and shiny
and lined with orangey/light brown veining/webbing
_______
the black locust pod on the edge of the gravel road i’m running
how i jump back because of its coiled and upright looking-like-a-snack-in-attack-mode appearance
and i, who am normally not alarmed by snakes
and think of my tendency to freeze rather than fight or fly
am comforted
by this proof of instant and quick reaction
of my animal brain
_______
in true secret-sister language style
ami and i develop the code
mouse trap for the parent trap-like switcheroo solution
that will lead us with ease
out of our wearying and complex human conundrums
_______
the black and white image i’ve had for years
of a photocopy of a magazine-found-photo
of a woman who looks like grandma
(in size/shape and clothing – stockings, skirt/dress whose hem lands between knees and ankles, plus a button down sweater on top and maybe even
a babushka)
walking with her back to the camera
up a country-looking driveway/road
to a country-looking house
lined by some country-looking orchards
and backdropped by a country-looking mountain
placed somewhere prominent because
it feels like the old world
that janina never wanted to leave
and therefore
sings alive in my bones too
_______

michael obryan tuning in from philly
saying
it’s not about what’s wrong with someone,
it’s about what’s happened to them
we don’t often think of people’s growth and joy and building skills (their human flourishing) as addressing trauma
_______
someone else later quoting someone else saying
if you’re not at the table,
you’re on the menu

_______
she says she’s glad to help me
on my quilting adventure, and i say
in whatever time we are connected directly in this universe on this planet, i hope i don’t stop learning you
_______
from the water world: 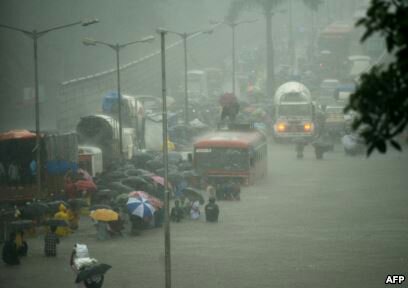 People wade along a flooded street during heavy rain showers in Mumbai, India. – voice of america, day in photos

a name for working on one task of a multi-task process and rather than being grounded and centered in the work at hand, the sense of
being swept up in the stress of not being able to do all the other steps at once but trying anyway
which reminds me a little of reading fast through a book and skipping over details and dialog
just to see what happens next
_______
it gives us something to talk about i joke woth rhonda at the post office
who’s back to working til noon
instead of the luxurious (for customers) 2:45
and who has no idea why it all got switched again
_______
emory who looks so tall
with his poofy bun and wild hair and blue shirt with some comic/superhero characters on it over red shorts
that i glance down to make sure he’s not wearing heels or platforms
and then later at dinner i hear myself saying that famous adult line
i think you grew in the week you were away
_______
we got a wasp! i call out to baigz
who’s not far down the road
where i open the big green mailbox
to see what’s inside
_______
i call them acorns she says
of the dots often referred to as bullets
when marking the beginnings of items
in a written list
_______
first, a rollicking round of the heart warrior song and then
now, dr., your sequinned mask
(i’m glad you’re here to operate, dr. danger, my heart has been waiting a long time)
_______
from the water world: 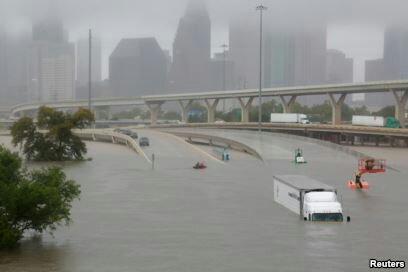 Interstate highway 45 is submerged from the effects of Hurricane Harvey seen during widespread flooding in Houston, Texas. – voice of america, day in photos

playing in this morning’s sky-theater:
a series of rumblings –
sets of thunder
entering stage left
sortof scaffolded
_______
how the downpour
during cat-feeding/chicken-feeding/dog feeding time
turns purple skirt
plum
and how the subsequent downpours after that mean
cycling through three pairs of shoes
until i pull on the quarter-of-a-size too-snug muck boots (ahem)
and tromp my way through too-tall grass
_______
persimmon season i say to myself
upon seeing the first fruits (not yet orange – a dusty green)
fallen onto wet ground just down the path
leading away from cool ranch
_______

season signal:
pulling light blue wool socks onto
rain-cold (and toweled off) feet,
a name for this first-time-in-months certain quality of cozyness
_______
how the image of building a boat out of glitter sticker paper
is exactly what this seriously noah’s ark of a day needs
_______
might be the last year  stan says
while grabbing yet another fried fish hunk
from the pan of them
the last year he is referring to
is of sorghum (starting, transplanting, weeding, stripping, harvesting, syurping)
(place symbol here that signals deep pause and heavy hit)

i wouldn’t give dean shit like i gave eric shit – dean’s got the senior VIP
i joke about how i asked eric if he indeed meant girl or woman
when he said his friend was dating this girl
and later we are all laughing when
dean and stan (age 70) are calling each other boy and kiddo,
and also when dean says where the old folks live  talking about sandhill
(the oldest being me at 41, and everyone else in their thirties and twenties and nines)
_______
nodding off while
swirled in the blanket layers
of cool ranch treehouse nest
under the almost-goldglow string of lights
fingers on the keys leaving me with these: 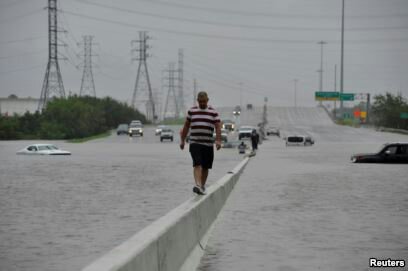 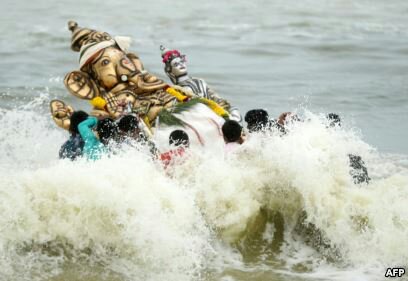 Indian devotees immerse an idol of the elephant-headed Hindu god Ganesh in the Indian ocean at Pattinapakkam beach in Chennai. – voice of america, day in photos

the $50 check left
in my donation box
for the poem about the new church
(the church of listening to one’s body,
the church of giving backc the old edicts,
the church of feeling wind in hair and gathering light and letting go of all the old stories
that no longer serve

never seen one like that says the early 20s cashier
at the pet food store
about the text tattoo racing stripe
that follows the length of my arm
i like it
_______
through the trees, a light in the west
everything else dark except for some constellations
and that parchmenty moonslice served up
swelling somewhere between crescent and half full
on velvet sky

i believe in the power of the possible she,
the very quotable, saysS
and i like to imagine banners of this phrase
hanging everyhwere
_______

laughing about the peanut butter cup bridge
constructed by laying peanut butter cup after peanut butter cup
side by side to build a bridge linking
us from here to there while she says
i’m a good student – that’s my orientation to the world
_______
usually, someone else shakes me loose she says
which makes me think of teeth
and the seven of bones
and the five of bones too
_______
i don’t want to be narrow/ed i say
not wanting to be pinned down
by what the answers might say
about me