the thin thread of panic
woven through emory’s voice
when he calls out to me
because he’s stuck in the creekside quicksand
which i have to give him both hands to pull him out
thwack isn’t quite the right sound
but i don’t know what it is
for the unsuctioning of foot
from muddy edges
_______
leapfrogging  i call it for how i cross the creek
by straddling the huge fallen tree
and scooch by scooch (sortof inchworm-like movement)
working my way from one end
to the other avoiding the cache of raccoon poop
on either side
_______
the flooding of the floodplain:
a sheen seen from the backroad
on an after-dinner walk
as the sun finally breaks through sky after three days (or more?) of solid gray and
much rain
_______
unnamed phenomenon:
the feeling, after days of gray and rain, of the first licks of sun on one’s face and on one’s limbs and watching it
lay itself across the land
the magnificent things it does
with all that water as it drip drops from the trees and rushes down the ditches
_______

seen from the forest path
down to the cedar room:
the smooth brown of shitakes bursting
out the bark of the logs tilted
on their ends under the shade of the filling-in canopy

how, when i name the people i miss,
i also name bodies of water,
mountains,
rivers,
sky views and
ocean vistas and
ferns and forests
_______

the lone spring peeper
peeping
over near karma pond
through the wet and dark and cold
(which, it seems, will continue for days)

anyone wants to come down to the sauna  i say of my room
whose stove is too big for its space
and whose floors and windows are too leaky to hold the heat in
which means by the time
there are coals in the stove, i’m opening the door and down to bare feet and tshirts
on a 40 degree day
_______

11:08PM ozzy osbourne’s no more tears
on one of the two classic rock radio stations
that my four dollar radio picks up
while my four dollar porcelain electric kettle slowly comes to a boil
so i can fill the hot water bottle
_______

emergency broadcast radio alerting
the mississippi river at quincy is forecast to rise above
flood stage sunday evening/monday/tuesday evening
and crest near 17.81 feet (16 feet being flood stage) until wednesday morning

what’s his face has approved
to expand off-shore drilling
is one thing i read at the end of the day
when i check in with the rest of the country/world
and immediately after i read the thing
about what’s his face saying we are really really close to bombing north korea (what kind of president talks like that!?)
and the news of north korea’s government handout
with the image of the whitehouse in the crosshairs

morning view from loft window
after being awoken by some creature knocking a 2 x 4 over
on the porch:
a squirrel (two feet away) defying gravity as it
shuffles sideways on one of the beam/supports
that runs horizontal under the metal roofing
(and later i tell trish/cynthia
how i like seeing them [the squirrels, close-up, eye contact]
because it helps me share this space with them
(though i still can’t handle
the intense scritch-scratch sound
of what sounds like them working away
at the drywall that is the ceiling
_______
rain guage reading .45
from last night’s showers
how i dump it out so we can start all over again measuring
the rain that will come in today/tonight
_______
wherein we all gather around the truck that does not yet
have a name to send a photo 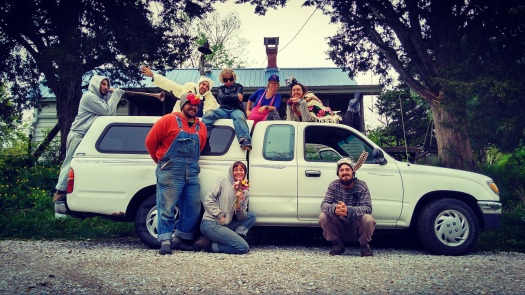 the sound of a single big drop here and there
as heard from the zendo (darien’s room)
while tyler, cynthia and i sit in silence
(it’s the kind of big drop that is gathered water from a smaller drop that results during a misty time like this evening)
_______
i place dust and shavings and small bits
of palo santo (on a warming stove) from a bag with a label on it
from the herb store in grants pass
and this smell will always make me think of camping
at refugio beach
on the journey/move
in tyler’s red truck (called the pluot)
from portland to san diego
not knowing
_______

i like watching someone do things well/make things well i tell kim
while we front porch perch
with plates too full
on this potluck night
_______
mama cat curled
in my cross-legged lap
(which she never does)
while the lightning bugs blink on/off
as she closes her eyes into
the cat-nappest of sleeps
_______
from the water world: 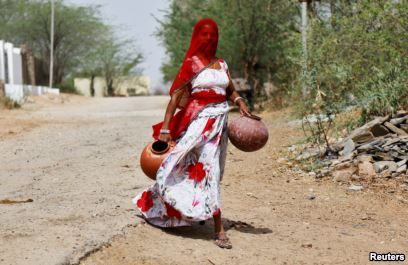 A woman carries earthen pots to fill them with drinking water on a hot summer day, on the outskirts of Ajmer, Rajasthan, India. – voice of america, day in photos

the victory of the last brassica start
being lowered
into the ground
while the wind moves around us
in the moldy mulch dust air
on a clear day
while the bright orange flags
that deliniate one variety from another
flip and flap brighter now than they will be
by the end of the season
_______
from the water world:

A man jumps off the cliff of Serendah waterfall in Rawang, outside Kuala Lumpur, Malaysia. – voice of america, day in photos 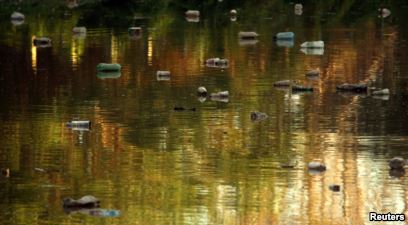 Trash is seen on the polluted El Claro creek on Earth Day in Tigre, Argentina – voice of America, day in photos.

how i fake-juggle the two oranges
we eat for breakfast
the saturation of the color of their skin
almost too much in a way that makes me
love this citrus fruit even mroe
_______
a certain kind of tranquility
cynthia and i agree upon
about spaces (like julia and mike’s, where we just spent the night)
that aren’t filled with the humming
of electricity
_______
drums and vermiculite and rubber boots in the hatchback
as we drive south into the morning
down highway 63 towards macon
_______
we are very blessed with water in this state molly says
of the over 1,500 miles of stream
in missouri
_______
when someone mentions the headwaters of the missouri river
in montana, smoeone else says and it’s clear, oh boy, that water is clear up there
which i take to mean a version of holy
_______

when she asks what the green on the topo map indicates
another person says forest
and she says that’s right,
though, of course, some of the areas that were forest, might not be anymore
_______

and when we talk about safety and trespassing (etc.)
someone says it is a good idea to wash your hands
after they have been in the stream
which makes me ache for a time
when the stream was the place to wash
_______
i go into the day not knowing
what the word riffle means, and i come out of it
having taken a sample of bugs
(or what one might call macroinvertebrates) from near one
where the sun glints off the rippled surface of stream water
tumbling over small rocks
_______

A man drinks water from an earthen pot kept by the side of a road for people on a hot day in Ahmadabad, India. Most of north India has been reeling under a heat wave with temperatures rising above 40 degrees Celsius. – voice of america, day in photos

baigz and cynthia and i
hauling the cart out to the heartland
filled with a chainsaw and acoutremonts
and then hauling it back in again
with the oak logs that we will drill holes into and fill
with mushroom plugs
how i say thank you and sorry to the tree
same as i say to the ants i mash
to keep my room and critter-free as possible
_______
let it go where it wants to
(rather than forcing it, with judgement, to go where you think it should) bruin says
of the shoulder that always feels hunchy and wrong
shore up those practices now he says
create these rhythms now in your body when you can
_______
i would like to use the word unfurl for what trish and dottie and eventually darien and i
do with the metal mesh fence
akwardly attached to the tposts
that we disentagle from years of non-use
then haul with a cart and by carrying
and then hold/place and pound in
to the pea beds
wrong materials i say speaking especially
to the unnecessary weight
_______
the smell of cynthia’s granola
drifting out the whitehouse window
as we clean the dirt of the hoes and shovels
outside the garden shed
_______
the maroon/red and yellow
of the first columbine blooms coming up
in what used to be the echinachea bed
and maybe still is
_______

An Indian tribal woman reacts after an earthen pot filled with water falls off her head during a 100-meter sprint event with water pots on heads, in the Suwori Tribal festival in Boko. – voice of america, day in photos

Indian youths play in the water with their herd of buffaloes in the Tawi River on a hot day on the outskirts of Jammu. -voice of america, day in photos

should you feel so moved, please click the tip jar to donate. your dollars will help sustain and nourish the detail collector. i appreciate your kindness more than you know.