poetry feast/find of the morning:

more shimmering than magic
but not quite enraptured as ecstatic
and most certainly hands down the best
shower of my life:
unlayering in the entryway
to step outside with a bar of soap in my hand
after a humid/hot day
of bug spray and sweat-sheen
(clothes still sweat wet) 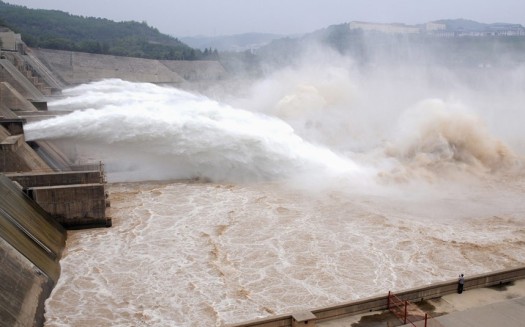 Water gushes from the Xiaolangdi Reservoir on the Yellow River during a sand-washing operation in Jiyuan, Henan province. Picture: REUTERS/China Daily

Fishermen from Ly Son island release fishing boat models with artificial soldiers into the water during a re-enactment of the Khao Le The Linh ceremony at a Vietnam Cultural village in Dong Mo, outside Hanoi. Picture: REUTERS/Kham

the levels of separation built in
between the killing
and death

talk of death and coffins over dinner
(juevos rancheros, corn bread, refried beans, roasted tomatillo salsa and salad greens)
spurred by joseph’s noticing of how (and wondering why)
obituaries rarely state the cause
and mica says if i die
you can include the cause of death in my obituary

and then
the tears in mica’s eyes
when i mention re-reading tamar’s last few blog entries this morning
we should go and have a tea party i say
at her grave
that sounds like a great idea says mica, necklace of blue stone glinting

and then i go into that al jazeera feature about
music used to torture detainees at guantanamo
(how the military used heavy metal but also innocuous things like
the sesame street theme song
how a.j. interviews soldiers about what they listened to
while in their tanks
they shouldn’t be able to do that darien syas
the music can make them feel happy
and full of rage (to kill)

remembering yesterday
when six-year-old emory asked at lunch
about the ladder of scars on my thigh
i don’t recommend it i say
did it hurt he asks not too much i respond
just enough to feel good joseph chimes in
it’s like these i point to the star-brand scars
but how did you do it emory asks
what did you use? something sharp i say
like what he asks
a blade, i say, a razor blade

A woman and her dog ride in a rickshaw through floodwaters in Gauhati, India. Several people have been killed due to electrocution and landslides triggered by incessant rains in India’s northeastern state of Assam. – voice of america, day in photos

A woman carries water to spray on to vegetable plants in Samroang Tiev on the outskirts of Phnom Penh, Cambodia. – bbc, day in pictures

mica and i put an ice-cream trip
(soft serve, three miles away)
on our after-lunch to-do lists
(strategically placed at 3:30 pm
so motivating towards the things to do
becomes easier)

aleppo, i have seen so many photos of you like this
over the past few years
it’s difficult to believe
that there is still anything left to destroy 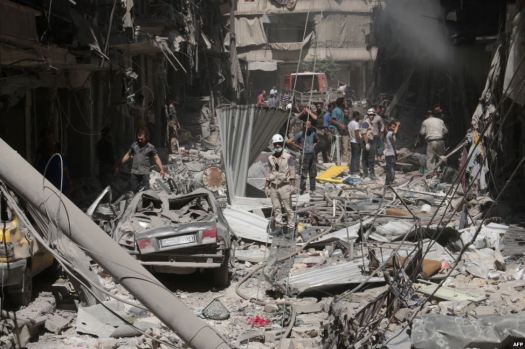 Destruction is seen following a reported barrel-bomb attack by Syrian government forces in the northern city of Aleppo. – voice of america, day in photos

A Muslim boy reacts as he takes part in a special prayer for better rainfall, in Mumbai, India. –  voice of america, day in photos

A man takes advantage of the heavy rain to give his Siberian husky a bath outside their house in Paranaque city, Manila. – bbc, day in pictures

sun so hot
the pads of my feet burn
on the black sandal foot-beds
heat sneaking in, scorchy
wherever toes and heel aren’t

booty summer i call it (bring it on)
booty life trish proposes
laughing about auto tune and justin timberlake
and that song trish’s neighbor’s would always crank
(you a bad bitch, you a bad bitch)
which reminds me of living next to dee
who owned a’s towing
(called a’s towing, becuase it would be the first name
to show up in the phone book)
and had a car alarm that ran through a succession of sounds
that would go off everytime the car was looked at
or everytime a cat landed on its hood
and the story about shiz
running over
to open the tow truck door
to turn down the music
that had been throbbing audiencelessly
for what felt like hours
the magic and story of a portland dead-end porch
lined with couches
circa 2006

A man wades out to help a driver in a partially submerged car in Fort Worth, Texas, following heavy rain. – bbc news, day in pictures

An Israeli firefighter douses houses as he works to extinguish a forest fire in Jerusalem. Picture: REUTERS/Ronen Zvulun

tiny blue bird in green-leafed branch outside my window
i guess indigo bunting
8 something a.m.

what is said about the white kitten
that arrived several days ago
and could fit in a tea cup
and who constantly needs to be held
by someone: too young

unnamed phenomenon: the feeling of encountering an old photo of yourself
that, as far as you can remember, you’ve never seen before
something like creating a new 20-year-old memory

Syrians tackle a blaze caused by what activists said was an air strike by forces loyal to President Bashar al-Assad, in Maaret al-Naaman, Idlib. – bbc, day in pictures

wa
Children in the Philippines are hosed down by firefighters ahead of celebrations of the feast day of Saint John the Baptist in Manila. – bbc, day in pictures

lightning bugs in lay-person’s terms
the male flies around and shines his light
in the same way the woodcock bird does his mating call/dance
advertising his let’s-get-it-on-ness
the females hang out on the ground
and blink a pattern back to signifiy
they’re accepting offers
and there’s one variety of lightning bug
whose female learns the pattern of the other varieties females’ blink signals
and do you know what she does when the males of the other species comes to her?she eats them 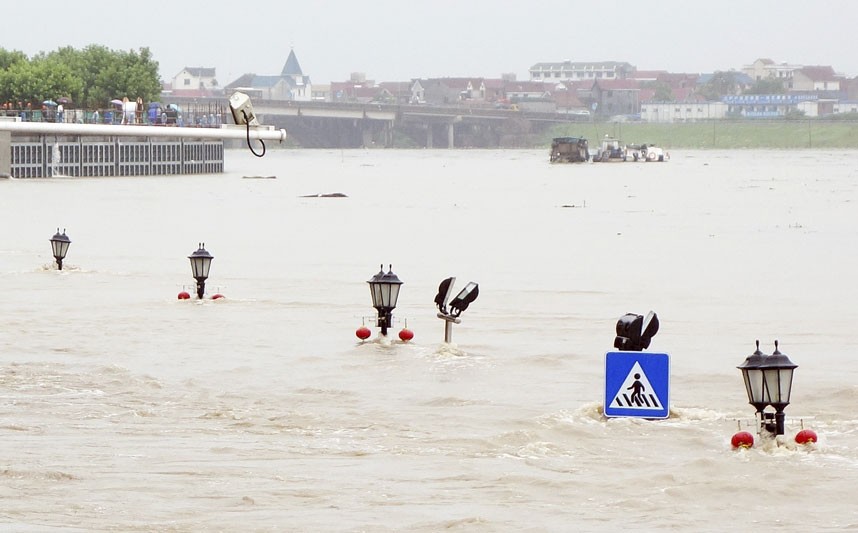 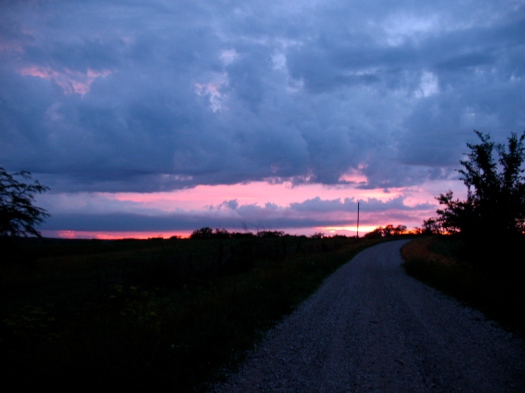 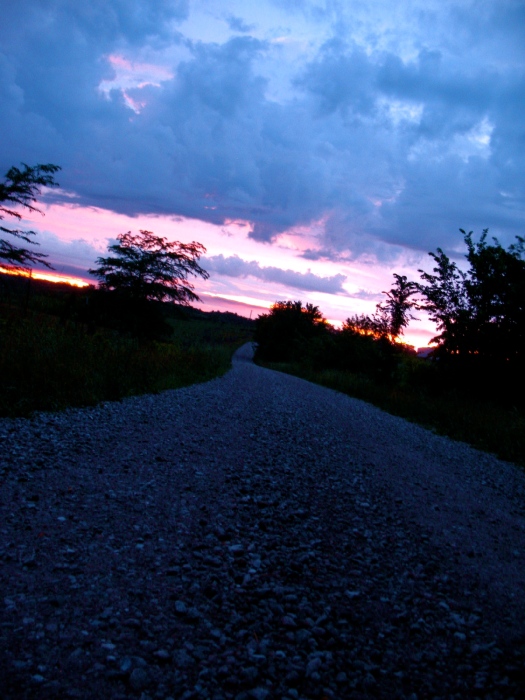 mosquitoes chase mica off halfway there

same as last sunset walk:
a deer and i face off on the rock road
until i get too close and she hops (white tail bouncing)
into the ditch and bounds/leaps away

People enjoy the weather during a warm summer day on the banks of the Garonne and the place de la Bourse in Bordeaux center, southwestern France. – REUTERS/Regis Duvignau

uncoiling bound bailing twine
(plastic-y, sometimes yellow sometimes orange/brown)
along the length of the tomato beds
in lookfar garden
wood-handled knife in my back pocket
sweat on my face
a careful weaving to hold up viney plants
between Tposts and later
trying to wash the tomato-black off my hands

i’m a bad influence i say
as the three of us (rachel, mica and i)
sip on our cans of soda
and kill that bag of potato chips
on a couch in the d.r. common house
discussing purses and varieties of drag

memphis public pool part deux:
running jumps off the diving board
emory pretending to mistakenly walk into the deep end
(forwards and backwards)
50 cents on the counter in exchange for a red kickboard
in the shallow end, i show nina and emory what 5 feet is like
when i’m flat footed (instead of on tip toes)
water just above my mouth
gurgling this is what it looks like when i’m flat footed
emory climbs down me like a ladder
to touch his feet to the bottom of the pool

summer pot of gold:
gigantic jar of strawberry smoothie
on the shelf in the walk in

A man carries a girl on his back as he wades through a flooded street after heavy rainfalls hit Changsha, Hunan province, China. – voice of america, day in photos

should you feel so moved, please click the tip jar to donate. your dollars will help sustain and nourish the detail collector. i appreciate your kindness more than you know.